Posted on November 13, 2014 by artsandheritage
Remembrance Day 2014
Remembrance Day is always a special time, and this year’s ceremonies were poignant reminders of the service and sacrifice Canadian soldiers have made throughout our nation’s history. 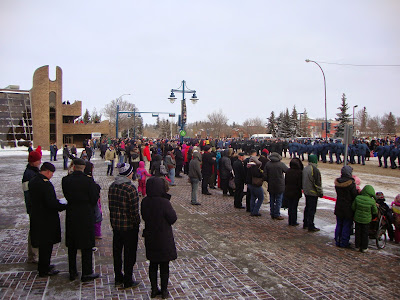 2014 marks the 100th anniversary of the beginning of the First World War, a conflict in which over 60,000 Canadians lost their lives.  After the recent tragic deaths of Canadian soldiers in Quebec and Ontario, the meaning of Remembrance Day was brought very much to the present day.
The Musee Heritage Museum was open from 10:00 am to 1:00 pm on November 11th, with staff attending the Remembrance Day ceremony at the cenotaph, just down the street from the Museum’s front doors.  It was great to see such a large crowd in attendance for the Remembrance Day ceremony on St. Anne Street. 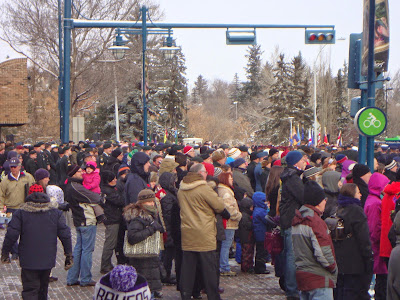 The weather was cold, so it was nice to have the museum open and many people dropped in to see the exhibitions and warm up.  We provided coffee, hot chocolate and snacks, including some homemade bannock, courtesy of a special friend of the museum (thank you Theresa).  Theresa’s mother, Dorothy, had served in the CWAC’s during World War II, and her uniform was on display at the museum for Remembrance Day.
We also had special exhibitions on display to commemorate the 100thanniversary of the start of the Great War: an honour wall telling the stories of the numerous men (and one woman) from St. Albert who served in World War I; and the Brigadier-General Raymond Brutinel exhibit.

Our Discovery Centre and Education Space were also set up with military artifacts, war posters, and interesting facts.  We even had some World War II uniforms that visitors could try on!
When the day was done, we had welcomed more than 400 visitors at the museum!  Thank you to everyone who braved the cold and came downtown for the Remembrance Day ceremony at the cenotaph, and to the Musee Heritage Museum, to help us honour our veterans and our fallen soldiers.