Posted on November 8, 2013 by artsandheritage
Not much work needed to put up exhibit panels? Check out what Roy Toomey, one of our education programmers, has to say about his experience writing the Korean War panels for the Remembrance Day 2013 exhibit at Musée Héritage Museum, opening on November 8, 2013. 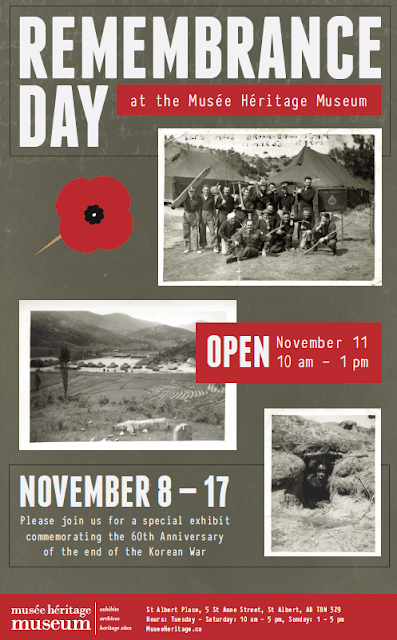 For Remembrance Day 2013, at the Musée Héritage Museum, we wanted to commemorate the 60th anniversary of the end of the Korean War (1950 to 1953).  This international conflict, in which Canada played a major role, is not well-known.  Most people’s exposure to the Korean War is the film and TV series: M*A*S*H. Some 27,000 Canadians served in Korea.  This was the 3rd largest contribution of all the United Nations, behind only the US and the UK.  Over 516 Canadians died in Korea, showing that just as they had in two World Wars, Canadians were willing to give their lives for international freedom and democracy.

As St. Albert’s museum, we wanted to link the Korean War to St. Albert.  Finding soldiers who served in Korea, and who were actually from St. Albert, wasn’t easy.  We decided to focus on Gerard “Gerry” Harnois.  Gerry was born in St. Albert, and his grandfather, Leon, was the first Harnois to settle in St. Albert.  Leon married Christine Lacombe, the sister of Father Albert Lacombe.  Thus, Gerry had strong ties to the history of St. Albert.  He served nearly 30 years in the Canadian Army, serving in World War II, the Korean War, and Egypt in the 1950s.  His three brothers also served in World War II, and one of them, Philippe, died in the war.

Being passionate about Canada’s military history, I was given the honour of researching and writing the first drafts of the Remembrance Day 2013 exhibit panels.  The research itself wasn’t difficult but writing the text panels was a challenge.  Working under the supervision of our curator, Joanne White, an expert at writing concise and informative museum panels.  To honour St. Albert’s French-Canadian roots, our panels are in French and English, so fitting all the information on only a few panels can be difficult.

I consulted Veterans Affairs Canada for much of the information about the Korean War, and our own archives for information about Gerry Harnois.  When writing about military history, I tend to be wordy.  To me, all the information is pretty important, but you can’t include every detail on only a few panels.  We wanted three panels about the war, and one about Gerry.
I started by organizing my facts, and then writing a short, organized history of the Korean War.  Once that first draft was done, I began paring it down.  Sometimes this meant changing the wording; other times this meant cutting “stuff.”  My first narrative was about four pages long!  With Joanne’s help, I cut it down to a page and a half.  Quite the cut, eh?  Once this 2nd draft was done, Joanne took over and made further cuts, creating the final narrative for the exhibit.  The trick to writing museum panels is to tell as much of the main story as possible, and to give a brief history of a subject, focusing only on key elements.  Working with Joanne to create text panels for the museum has taught me to keep it simple and concise.

There are other Korean War veterans that live in St. Albert today. Al McBride and Gord Carter are two of them. For more information about their stories, please visit the St. Albert Leader‘s articles at:  Credit where credit is due, and A different perspective on Remembrance Day.