Posted on July 4, 2012 by artsandheritage

Thank you to all the people who came out on Canada Day to celebrate the holiday with us at the Heritage Sites of St. Albert!  Canada Day 2012 was a lot of fun all around and was well attended, despite rainy weather to begin the day.  At the Father Lacombe Chapel, visitors made Canada Flag pins and beaver puppets, and worked through a Mission Hill scavenger hunt.  At the St. Albert Grain Elevator (SAGE) Park, where we had about 400 attendees, visitors made noise-makers, post cards, and railway lanterns, and took tours of the grain elevators.  The celebration at SAGE Park was called “Dominion Day” to honour Canada Day in the past.  As such, the festivities included a huge cake in the shape of a Union Jack!  At the Little White School, where we hosted about 200 people, visitors were again treated to a giant cake shaped like a Canadian Flag, and took part in our “Great Canadian Flag Debate Contest.”

The contest helped visitors learn about and re-live the real life Canadian Flag debate that took place in 1964.  Up until 1965, Canada, despite being an independent country since 1867, had no official flag.  As a national flag, Canada used either the Union Jack, since the Dominion of Canada was a loyal part of the British Commonwealth, or the Canadian Red Ensign.  In 1964, Liberal Prime Minister Lester B. Pearson announced that Canada would adopt an official national flag that was unique to Canada – something to help unify Canadians under a single banner.  He favoured a flag with a blue bar down each side, and a red maple leaf in the centre: the “Pearson Pennant.”  John Diefenbaker, leader of the Conservative Party (official opposition at the time) opposed this idea, declaring that the Red Ensign should be the national flag of Canada.

To solve the debate, Pearson created a 15-member committee to debate and decide on a new national flag for Canada.  The committee debated the issue from May to October of 1964.  During that time, some 3,500 flag designs were submitted by concerned Canadians across the country, each hoping his or her design would be chosen to represent Canada.  In the end, George Stanley’s simple, yet now iconic, design was chosen unanimously by the committee – the flag we know as the Canadian Flag today.  Queen Elizabeth II proclaimed the new Canadian Flag in January 1965, and on February 15th, 1965 the new flag was flown above Parliament Hill in Ottawa.

At the Little White School, we attempted to re-live this debate by asking visitors to submit their own designs for a “new Canadian Flag.”  We asked them to consider symbols of Canada and what Canada meant to them when designing their flags, and we received over 50 submissions!  The contest had four categories: ages 5 and under, ages 6-9, ages 10-12, and ages 13 and up.  Judging this contest was very difficult!  There were so many beautiful, thoughful designs, but in the end only one winner could be chosen for each category.  Below are the winners in each age group. 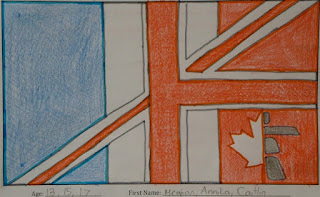 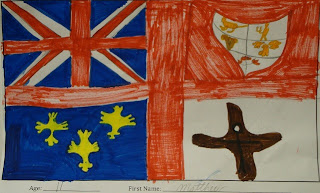 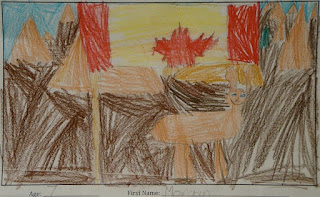 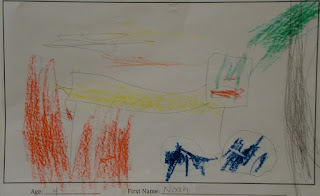